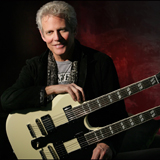 Former Lead Guitarist of the Eagles Performs on October 19

LEMOORE, CA – (October 6, 2017) – Legendary musician Don Felder will be performing live at Tachi Palace Hotel & Casino on Thursday, October 19, starting at 7:30 pm. Felder was one of the five members and former lead guitarist of the rock group the Eagles for 27 years.

Credited with adding a rock and roll edge to their country sound, Felder wrote the music for the Eagles’ biggest hit, the multi Grammy award winning song “Hotel California”. With 14 Grammy nominations and four wins, his signature guitar work has become legendary on songs like “Hotel California”, “Life In The Fast Lane”, “One Of These Nights”, “New Kid In Town”, and more. Felder and the Eagles album, The Eagles’ Their Greatest Hits 1971- 1975, has reached over 26 million copies, becoming the best-selling album of the 20th century.

A member of the Rock and Roll Hall of Fame since 1998, Felder also became a New York Times bestselling author with his autobiography “Heaven and Hell” about his life with the Eagles. He most recently completed the “United We Rock” tour this summer with STYX and REO Speedwagon.

The Tachi Palace Hotel & Casino is owned and operated by Tachi-Yokut Tribe. Tachi Palace is located in Lemoore, CA, on the Santa Rosa Rancheria. Tachi offers the finest gaming action with slots, bingo, and various table games. They also have three dining options and host national entertainment. The hotel features 255 luxurious rooms and suites. Bookings for weddings, special occasions and business functions are also available. www.tachipalace.com for up to date information on all our events. Follow us on Twitter and like us on Facebook.